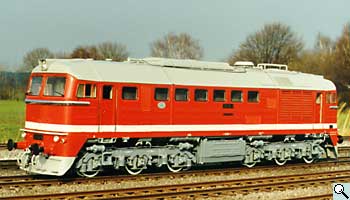 As its name “Taigatrommel” (= “Taiga Drum”) suggests, This locomotive was initially developed as a double loco M 62 for the Russian Taiga. The V 200, as a single locomotive, was delivered in large numbers to all member states of CoMEcon. Starting in 1967, it was delivered to the DR. Because of its loud exhaust noise, it was equipped with sound absorbers shortly after it was introduced. Shortly after the DB took over the DR, the V 200 was no loger used. Since 1999, more and more “Taigatrommeln” have turned up at German private Railways.

Our model reflects the different states during the DR time. In addition, we have built the Polish version with large headlamps.