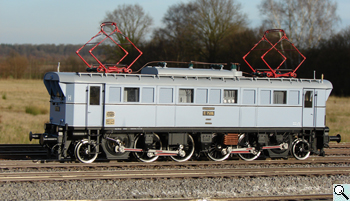 The type of E 75 is a successful development from the rather awful characteristic of E 77. from the three-part, prone to wear and already at a speed above 40 km/h unusual turbulent locomotive the engine mover with diagonal rod impulse was adopted and in a one-frame-loco developed.

The E 75 was in practical service in Bavaria and Central Germany. After the end of war the locos mostly were set into service in the area of Munich. After 44 years, in the year 1973, the last locomotives of this type were set off duty. By the great fire at the BW of Verkehrsmuseum Nürnberg at Oct. 17th 2005 one of a restored E 75 (until 1982 for nostalgic use) is totally damaged - a restoration until now is not finally concluded.

For the production of the electrical parts of E 75 the company Bergmann-Electrcitäts-Werke AG (BEWAG) at Berlin was responsible. The mechanic part was delivered by Maffei from Munich, Linke-Hoffmann-Werke AG from Breslau and Berliner Maschinenbau AG, formerly Louis Schwartzkopff Wildau near Berlin.