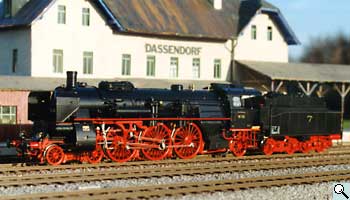 A total of 20 machines of this type were built between 1918 and 1920. They were used on the flat route through the Upper Rhine Plains between Offenburg and Basel. Most of these locomotives were no longer in use after 1948. By 1968, only two locos remained at BZW Minden.

The 18 314 remained in the GDR after World War II. In 1960 it was reconstructed with a new boiler, Riggenbach back pressure brake and lower rotation apron.

In 1967 the machine was converted to oil-burning. Today you can see this loco at the Auto- und Technikmuseum in Sinsheim.

Our series contained four variations. The Badische Staatsbahn IV h finished in blue/red paint. The DRG BR 18.3 with Wagner smoke deflectors. The DB 18 323 with Witte smoke deflectors, as it is located in front of the academy in Offenburg. The 18 314 of the DR in its final state with oil-burning, painted green/red with white ornamental stripe.