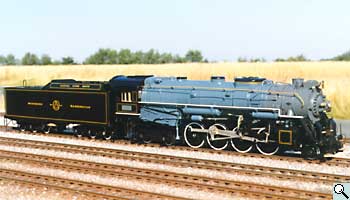 Undoubtedly the most successful Berkshire was the one developed according to a design of the thirties. From 1942 to 1949, a total of 55 machines were built by the Lima Locomotive Works. A Berkshire was the last steam engine ever made by this company. The machines were used in heavy and fast freight service and sometimes in passenger service as well.

Originally, our series of the Berkshire was to be distributed by a dealer from the United States. Unfortunately he left this project, so most of the models were sold in Europe. Some models were alternated and got a different paint scheme at the request of a customer. As a result this became a new series of locomotives of the "Capital Cities Route".