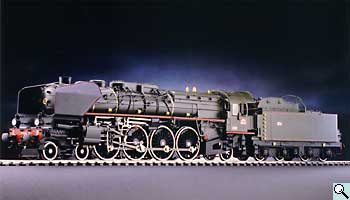 The construction of the 241 A 65 was developed out of a design from 1925. The first locomotive was delivered at the end of 1930. The visual design of this machine was very well done. This compound engine with four cylinders was built for the hilly area in the East of France. In 1998, the only 241 A 65 that has survived was reconditioned at the repair works in Meiningen/Thuringia by order of Swiss railway fans. Afterwards, it was fully servicable again.

We made this SNCF 241 A 65 as a model. Today, collectors take a special interest in this series. As a variation, we made the DR 08 001 with oil burning. The prototype for this was a 241 A that came to Eastern Germany in the turmoil of World War II.

This series was ordered by Fulgurex.