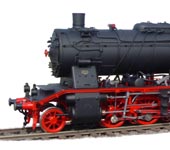 The württ. “K” and later type BR 59 was the only German six coupling loco.

This locomotive for heavy good trains was built for the Geislinger Steige by the Maschinenfabik Esslingen.

The work on the first of there four cylinder locos started in 1917.

Because of the World War I the completition of the first three machines was delayed. These first machines have a little boiler body with a dome and with only one sand box.

The whole series consisted of 44 locomotives of which the last ones were delivered in 1924.

Most of the machines had one great sand box with two filler shutters under a covering in front of the boiler and a smaller sand box behind the dome.

Besides the Geislinger Steige the strongest Deutsche Länderbahn loco with 1.900 hp was put into service at the Austrian Semmering route.

Because of the electrification of the Geislinger Steige these slow-speed machines were scrapped from 1953.